May Day 2018 and I was at Disneyland.  PixarFest was going on so I thought I would take the time and check out this new event at Disneyland. Driving up from San Diego I didn't hit the park until after 11am.  The crowds were still manageable and I was able to ride several of the E-ticket attractions including The Haunted Mansion and Splash Mountain that were closed in the Winter on my last visit.

Splash Mountain is one of my favorites, especially the early part of the ride cruising in the log looking over the Rivers of America. I used the Singer Rider Line so the wait was next to nothing.  The referb seems to have lightened up the character scenes some but it moves pretty fast when going through the show part of the attraction.  It took several times before I was able to use my FastPass as The Haunted Mansion was closed for technical reason each time I would return.  But once on, was great to see the original version. Seems most of the time to come Disneyland it is the Halloween version.  I really seeing the Hat Box Ghost each time as it is a cool effect!

I was going to ride the Mark Twain as I had read that if one asks one can ride with the Captain and even steer the boat.  But apparently the rules have changed and now the Captain will pick someone at random, if they want to.  I didn't like that change, because no doubt they will often pick kids or families.  Seems highly unlikely that someone traveling solo would ever get selected.

Another change that I wasn't crazy about was the Single Rider Line for Indiana Jones.  I have used this many times and it is always a quick way to get onto the ride.  But they have changed the format of this and the single riders we stopped way before the Projector room.  I finally walked out after waiting 20+ minutes without moving.  Never did get to the Projector room. This defeats the purpose of the single rider line to me.

And there there is PixarFest.  I was underwhelmed with this as it seems more of an event to have different food.  Funny how Disney has turned food into something people will stand in line for hours to buy and eat! There is no real theme to any of the parks like Halloween or Christmas. Sure they have 2 parades and a fireworks show but really nothing else.  I know that there will be a huge update to California Adventure, perhaps they should've waited until it opened to celebrate.  I don't think I would make a special trip for PixarFest.

Now I did try two of the Pixar food items at Rancho del Zocalo-Restaurante. First up was the Nachos, that were very good.  They weren't overloaded with cheese that make the home made chips soggy.  Everything was in the right combination with just the right heat for Mexican food.  For dessert, Mexican Chocolate Pot de Crème was creamy with a more dark chocolate flavor that wasn't overly sweet!

To show how this event is more about money than Pixar, look at the new Churro challenge for Annual Passholders.  Buy a map for $5 then try several of the new Churro flavors at about six bucks each and you will receive a pin.  Here are the people that are really into Disneyland and there isn't any benefit for being an Annual Passholder other than you can pay to Disney in order to eat Churros!

This wasn't all bad, believe me.  After going to Disneyland all these years there are still experiences I haven't done.  One of them was to ride the Main Street vehicles.  Well, I rode the OmniBus for the first time and it was great to see Main Street from a different view! 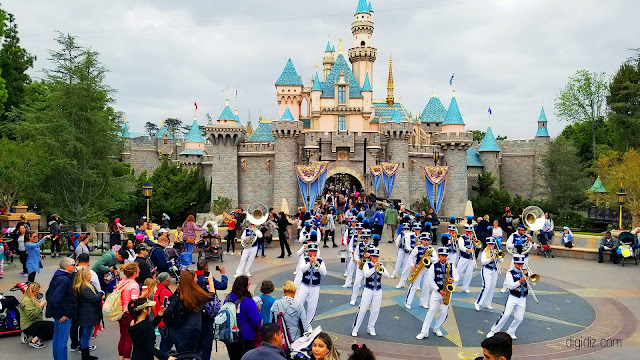 There was also a fine meal at the Cafe Orleans that is always relaxing when the weather is great to each outdoors. I enjoy the Flag Retreat ceremony at Town Square in the evening.  Makes one proud of their country and Disney for keeping something traditional in the day of high tech.

It was just a day trip but as always, it felt like home to me!!  My guest and I say so long until next time! 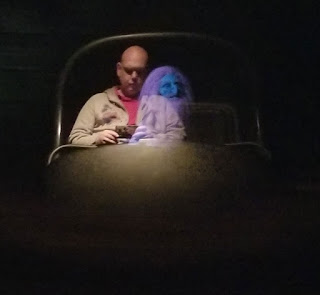