It had been nearly 40 years since I last stayed at the Disneyland Hotel at the Disneyland Resort in Anaheim, California.  We stayed in the newest tower that was then called the Bonita Tower on the south side of the property.  There were waterfalls with trails and Koi ponds and hitting the Dancing Waters show in the evening was just a few steps away!  Not sure what floor we were on but we had a view of what was a lake and pools that were surrounded by the 3 towers.  There was a green lazer that bounced from the three buildings at night.  The window would open and a nice breeze would fill the room with a very small balcony.

This year I was able to treat myself to a stay at the Disneyland Hotel.  Check in to the hotel was easy and my room was ready. I had called ahead to request a King bed and that is what I got in the Adventure Tower facing the pool on the 6th floor. The room was not as spacious as the Grand Californian. (A review is coming later on.) That is to be expected as knowing my Disney history this was the first tower built back in the early 1960's. 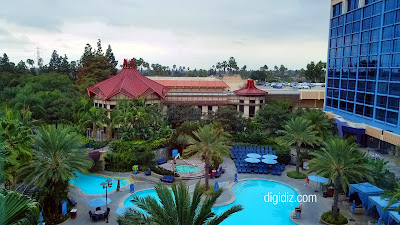 My room had a view of the pool complex and it was great to see the Monorail slide and all the Palm trees to give things a tropical feel. The view was nice and I could see when the hot tub was empty. I learned that between 11a-2p is a great time to use it as after 2pm more people return to their rooms and the pool complex gets busy. 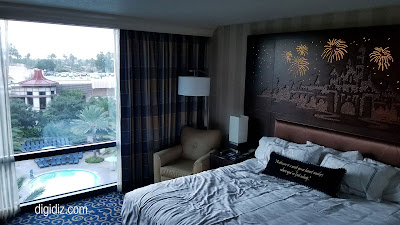 The bed was comfortable but I felt like it was a bit lower on one side and there was a feeling of rolling towards that side. There is a flat screen TV and refridge available with a small chair for sitting and a small desk. The closet is room and had bathrobes for use. The decor is dark with navy blue and wood tones.  Over the bed is a carving of the Disneyland Castle.  With a little secret switch you can have fireworks explode over the castle with a well known Disney tune playing. The photos and graphics are black and white photos of Walt Disney with the carpet and other cloth in the room having a hidden Mickey design in gold. 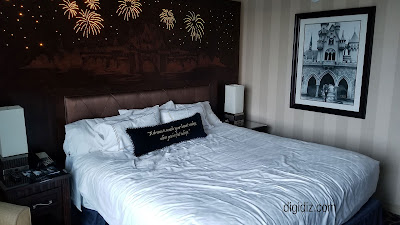 The bathroom is roomy and the shower had good power. I found the shower head too low and when i adjust the head it was separating from the pipe and leaking lots of water! Not what one would expect in a hotel of this caliber. They provide soaps which are nice. I did find it interesting that there was a small card with the shower gels and such with Walt that said Get Clean or something like that but the last night of my stay that card was removed. I wonder if they worry people will take it.

The rooms were cleaned everyday, but the first day of my stay the room wasn't cleaned until 3p which I find extremely late! The next two days they were much earlier. They even wanted to clean my room before checkout time on my last day, which was weird as wouldn't they wait until I checked out? When I stayed at the Grand Californian my room was cleaned every morning while I was in the park and returned about noon. The Disneyland Hotel doesn't have turn down service in the evening like the Grand Californian. 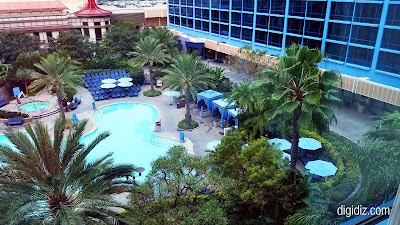 I enjoyed taking time away from the parks in the afternoon to rest and relax in the hot tub.  Breakfast was at the Tangaroa Terrace which is steps away from the entrance to the Adventure Tower.  It was pleasant to sit outside and enjoy a breakfast of standard fare like eggs and bacon.  There were several of the cats that live on the Disneyland Resort wandering around while I ate.

This is the closest tower to the parks, with the Monorail station only 5 minutes away.  You will have to go through security to enter Downtown Disney and then the parks.

One thing to note, it was only $20 more a night to have the pool view versus viewing the neighborhoods of Anaheim.  I found it worth it.

It is a special treat to stay at the Disneyland Hotel.  It is expensive but fun to experience for a rare visit to Disneyland!