With the new resort hotel coming to Disneyland one has to wonder what has happen with the trademark of Disney Imagineering.  That is storytelling and theme.  It will ruin views of the current and original Disneyland Hotel, funnel thousands of guests into a tight area when parks open and close. It could ruin the views in Disneyland that was suppose to keep the outside world out.

Then there is that is doesn't theme well with anything that is around it.  It is modern looking but doesn't tie into the theme and design of the Disneyland Hotel.  It overwhelms Downtown Disney with another design and certainly doesn't fit the classic lines of the Grand Californian. Look at what Imagineering did with the hotels around the Magic Kingdom.  Tomorrowland has the Contemporary Hotel in the sight line, with the Polynesian across the lake from Adventureland and Grand Californian in sight lines of Main Street.

I believe that Imagineering could have created a dynamic design for this new hotel.  One thought is that they could have gone in a new direction with the land that Disney owns, east of the resort. 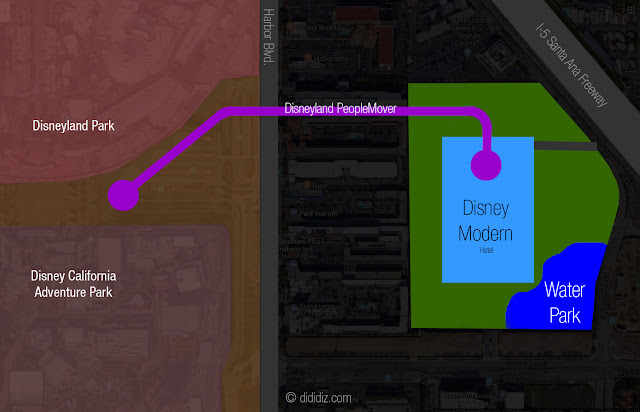 My idea is a new hotel resort connected to the parks located on the East side of Harbor Boulevard. This hotel could be called Disney Modern Hotel and it would tie into Tomorrowland that it would have views of.  An open atrium tower hotel, the new modern version of the People Mover would connect the hotel, fly over Harbor and terminate at the plaza in front of both parks.

With a parking garage on the first couple of floors this would allow the 2 side tower to rise above the motels along Harbor and provide views of Disneyland and California Adventure on the West side. Views on the East side would feature amazing sunrises over the Anaheim Hills and mountains to the East.  This full service luxury hotel would have a modern design with a trendy restaurant on the top floor, with special seating for fireworks.  In one section there will a Tomorrowland themed water park.  One slide could have a Adventure Through Inner Space story line. Or water slide featuring Buzz Lightyear complete with lasers!

Some might say why would guests want views of the rooftops of homes and business in Anaheim. Well the two current Disneyland tower hotels have the same views depending on the side of the hotel one stays.  I believe guests would really enjoy riding the People Mover again.  This also allows businesses along Harbor to be part of the entry into Disneyland that the former East side parking pedestrian bridge was going close off.

With the Disney Modern, Imagineering could also create a Star Wars Hotel in California.  If they moved the new parking garage South then a Star Wars Hotel could be built between them.  This hotel requires no windows as all the "windows" have views of space via digital media.  The front of the hotel would have a space port industrial design that would work well with the parking garages. This location would also allow guests of the Disneyland Hotel to have direct access to Star Wars: Galaxy Edge.

These 2 hotels would balance out the crowds at Disneyland Resort and provide a better guest experience.  Having some open space will allow guests to feel comfortable and relaxed where enclose and compact will make them feel overwhelmed. With these ideas, Disney ends up with 2 new luxury lodging experiences that are unlike any other.

Who's ready to check-in to one of these resorts?